MY introduction to Don Quixote took place in a pub called The Clarence in the northern town of Dalton-in-Furness, back in 1974, and at a time when I was obsessed with a song called Pinball and the world seemed a much milder, progressive and optimistic place. On the wall opposite the bar hung a colourful and captivating image of two dark figures crossing an evening landscape – one tall and shabbily elegant on a broken-winded horse, the other small and fat, perched upon a mule. From the dust of Spain, Don Quixote and his devoted servant and friend, Sancho Panza, had strayed into a world of rain, bar-billiards and pigeon racing. It was an unusual subject for a Lancashire pub where old men with their ties tucked in their trousers occasionally reminisced about the trenches and chuckled over cards and cribbage boards, but it lifted the decor from fifty shades of nicotine and elevated the conversation of the clientele . . .

The landlord was a thoughtful old fellow called Reg – one of those landlords who could, and did, settle arguments with a few wise words. He was also a source of knowledge; and responding to my

enquiry into the significance of the picture, he sketched the basic plot of Miguel Cervantes’ greatest work and the wanderings of Quixote and Panza through 16th Century Andalucia and eastern Spain, in search of adventure.  I had heard of Don Quixote, or Don Kwiksoat as he was often referred to in those days, but was unaware of the details. Reg filled in many of the blanks while serving pints of Lion ale.

I decided that the next time I visited a bookshop I would purchase a copy of The Adventures of Don Quixote de la Mancha, long-winded, cumbersome and overwritten as they are, and follow his travels in search of fame, glory and the love of Dulcinea del Toboso. Then I ordered another pint of Lion bitter and played Brian Protheroe’s Pinball again on the jukebox.

Almost forty-four years later I have accomplished my quest after suffering a number of false starts and abandonments. It has been a vast and weary struggle, progress being fatally interrupted by ill-advisedly embarking upon that other famously-unreadable book, James Joyce’s Ulysses, when a colleague told me no one had ever reached the end.

Looking back, having conquered the pair, I don’t know which provided the most torment – the nightmarish qualities of Leopold Bloom’s 24-hour pub crawl around Dublin or Quixote’s  doom-laden trek through the Spanish mountains. They are both celebrations of futility.

Here I am in my adopted home of Orgiva in the heart of the Spanish sierras. Orgiva has recently erected a fine statue of the fictitious Quixote because the town’s library holds one of the world’s most extensive collections of Quixote editions, published in as many as fifty languages and sourced from a huge variety of countries. Considering Cervantes sold his first copy in 1605, that’s quite something. 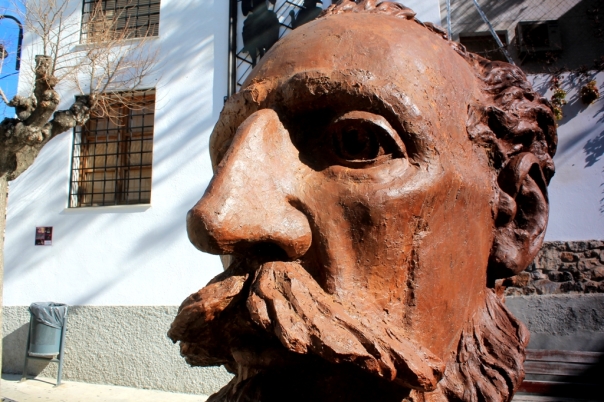 Morecambe might have a statue to its eponymous son, Eric; Barrow-in-Furness its Emlyn Hughes; Ardrossan a statue of William Wallace that actually looks like Mel Gibson; Dublin a baggy-coated James Joyce; and Tintagel a bronze effigy of a British king who never existed except in the minds of romantic poets; it is only fitting that Orgiva should honour a fictitious knight whose crazy world revolved around chivalry and graciousness. Long may his sad countenance watch over us.

One day I might return to The Clarence to see if the picture still hangs on the wall. Meanwhile, I shall revisit 1974 on YouTube for another encounter with Protheroe and Pinball.

Welcome to Awkward Roads. This is a website about searching for a new home in a strange land. It's about setting off in a new direction. Trouble is, at this point I'm not sure what that direction is – except that it's south and towards the sun. There's no clear route and no telling where these roads will take me, because roads can be awkward at times. That's why this website is called Awkward Roads . . .

TAKE A LOOK AT MY MOUNTAIN BLOG – BECAUSE THEY’RE THERE