THURSDAY AFTERNOON: Sitting in Flo’s Cafe, just south of Doncaster on the Great North Road. The chap on the next table is giving us advice on driving through France. This is after telling us he has just bought a six-berth campervan that has its own sewage and waste-water tank. “Don’t need to hook up to owt, mate. Don’t need to hook up to owt.” I marvel at the ingenuity of the leisure vehicle industry. Not even the snail, nature’s paragon of self containment, evolved to the level of carrying its own waste about . . .

“Watch out for the Russians and Romanians on those French motorway service stations,” he adds. “Don’t sleep in yer van because they’ll force yer doors open. Aye, and with you in it. You should read those internet forums. Russians and Romanians everywhere. And if you get robbed, those French police won’t help you. No way. Too much paperwork. You’re British, see. Too much hassle. They don’t want to know.”

Then he adds: “Oh, and t’Channel Tunnel’s closed. It were on Sky News this morning. French strikers burning tyres on’t track. Queues miles long. Won’t be reet till Sunday. You won’t get ovver theer tonight.” 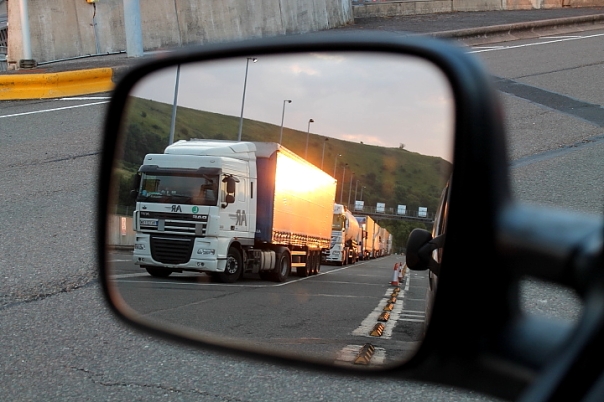 We continue south, hit the M25 and cross the Thames on that big bridge, then slip through Kent on winding backroads, avoiding the M20 and its miles of stacked lorries. We arrive at Folkstone on schedule, drive aboard Le Shuttle, and our train departs at precisely 8.50pm, which is the time we booked. So much for Sky News.

Down into Normandy and, beneath a full moon, we park up for a few hours’ sleep in one of those quiet motorway service areas the French do rather well. We see no Russians or Romanians. If they are about, they are sleeping in the hay fields.

COUNTRY ROADS: French toll motorways are fast but expensive. When you drive a 1991 Volkswagen Transporter campervan with a high top, speed is irrelevant and expense is a burden. At Poitiers we veer off onto the N10 – an old dual-carriageway which reminds me very much of the old A74 between Carlisle and Glasgow. It’s a carpet of tarmac laid over every lump in the landscape and flowing round every hillock. It bucks and dives like a wild thing and has those crazy cross-junctions where you just know a tractor is going to pop out at the last moment. In places it is bordered with trees, proper French avenue fashion, and with matching trees at precise intervals in the central reservation. This impresses me no end.

My brother-in-law once told me that the French practice of planting trees along major roads was initiated by Napoleon, so that le Grande Armée could march in the shade. It never happened in Britain because of austerity measures. That’s why when you see pictures of British soldiers in action they always have twigs and branches stuck on their helmets to keep the sun off. 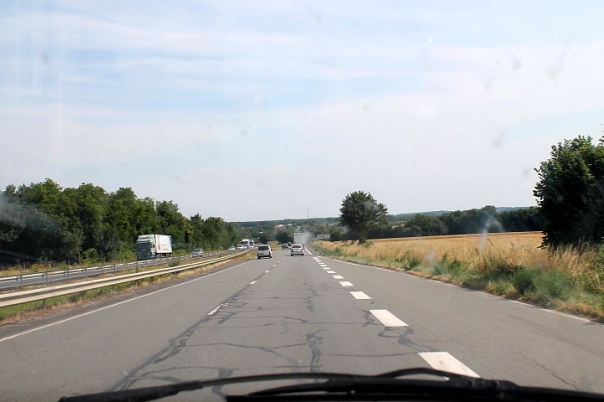 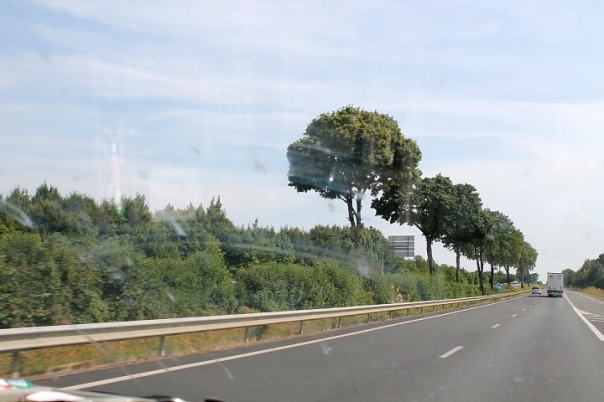 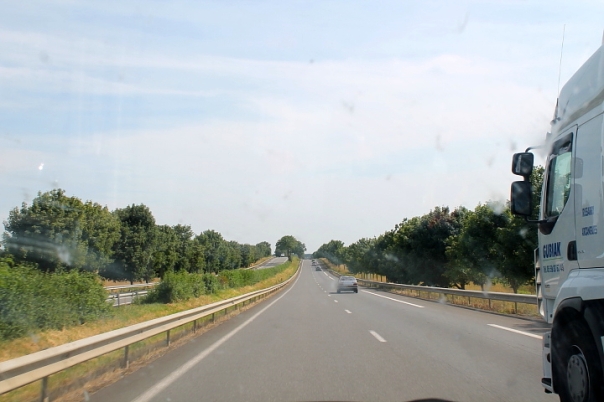 CAT CRISIS: South of Bordeaux and the cats are in a poor and deteriorating state of health. Sorry, I haven’t introduced the cats. Meet Agnes and Bessie, sisters named after two maiden aunts who were a large part of my formative years.

As Friday gets hotter and hotter they slump in their cage with mouths open, panting like dogs, and despite an adequate supply of water and fresh air. We pull over just short of Bayonne to let them out, and the darker cat, Bessie, has trouble standing and she collapses in the dust. She just lies there and won’t move.

I think she’s going to peg out but I don’t say so. I have visions of me digging a little grave at the roadside like the Joads dug for their grandma or grandpa – I can’t remember which – in The Grapes of Wrath. But I don’t have a spade in the van, and this plays on my mind. What am I to dig a grave with in this compacted earth? A spoon? A 21mm ring spanner?

We sprinkle water on Bessie’s nose and she licks it off. We repeat this practice for about fifteen minutes and then she starts to lap water from her saucer. I refill her saucer and she laps that up as well. The other cat watches as if to say: “Huh, that’s no big deal. I’ve been lapping water since Scotch Corner. Give me some attention, why don’t you?”

An hour later, in the cool evening air of another French motorway service area – which is also free from Russian and Romanian bandits – the cats have perked up and are almost back to normal. Whatever normal is in the cat world. 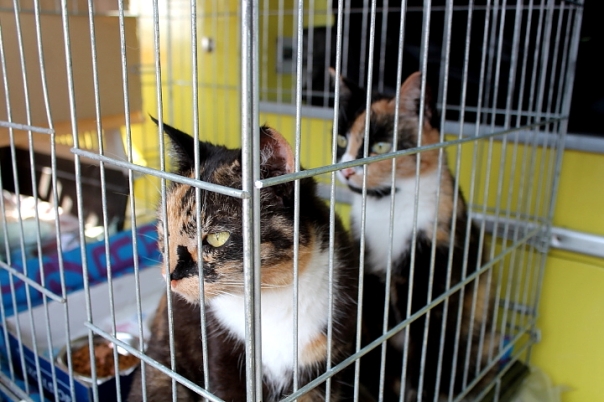 SOUTH OF THE BORDER: After the flatness of France and the knobbly western end of the Pyrenees we enter Spain’s continuously changing landscape. First our motorway winds through mountain tunnels and rocky gorges, then crosses a fertile plain, then enters another range of mountains.

On the crest of a pass called Puerto de Somosierra, in the Sierra de Guadarrama, we stop for ice-cream. On the wall of a chapel is a plaque celebrating the valour of a Polish cavalry regiment. Puerto de Somosierra was the scene of a battle during the Peninsular War, in November 1808. Napoleon’s army, marching from the north, engaged a Spanish force that was defending Madrid. Napoleon sent Polish cavalry up the slope towards the Spanish guns, and more than 500 Poles were slaughtered. However, the French were victorious and Madrid fell a few days later. That’s all right then.

So I sit there licking my ice-cream and thinking: those poor Polish mothers and fathers on the banks of the Vistula or in the forests of the north. When they brought their sons into this world, and sent them to school, and watched them mature, did they think for one minute their offspring would die on a Spanish mountain top, blown to bits by Spanish guns pounding a French army? 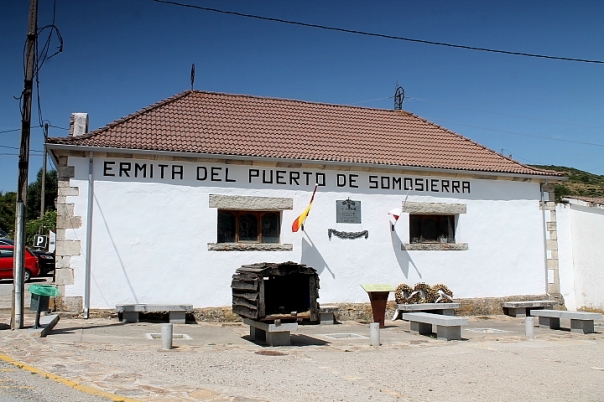 A LOT OF BULL: The big metal bulls that stand on hilltops near Spanish highways have become a familiar and well-loved sight in Spain. About twenty years ago there was a government move to have them dismantled (there are about 97) because, strictly speaking, they are advertisements for Osborne Veterano brandy – although there are no words or slogans painted on them. It would be like Matthew Gloag and Sons erecting 100ft-high red grouse all over Scotland. No words, but I think we’d get the message. I would, anyway. 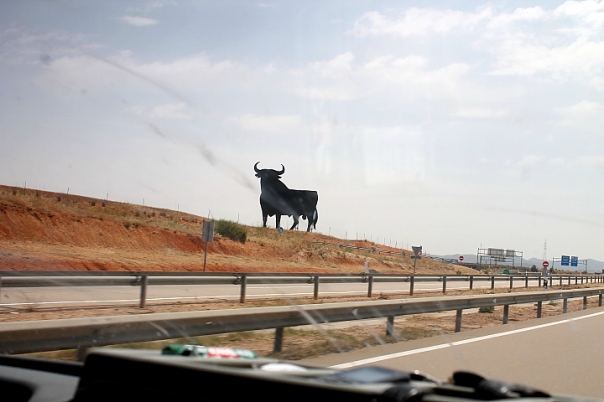 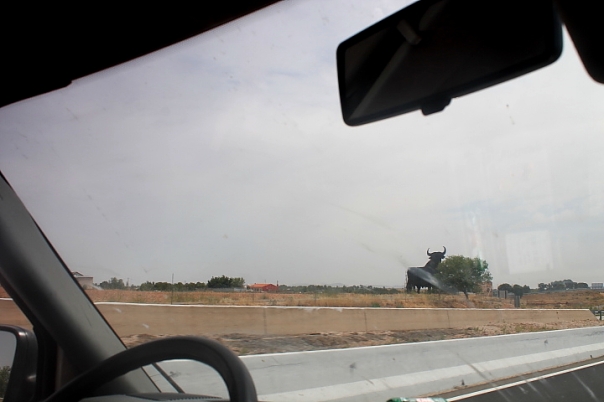 Apparently, the bulls have become part of the fabric of Spain, rather like the Angel of the North in Gateshead. Legend has it that young couples trying for their first child will reap success if they make love beneath the bull’s testicles. That happens in Gateshead too. 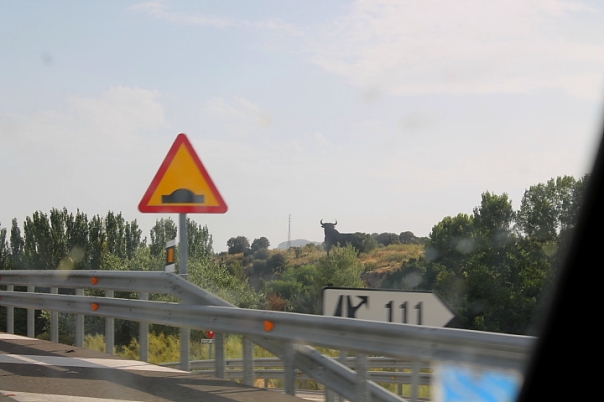 SATURDAY EVENING: We pass through a violent dust storm near the town of Jaen, during which our overloaded van gets buffeted around like nobody’s business. Then, after snaking through another range of rocky mountains, we hit the outskirts of Granada and behold the Sierra Nevada rising in great blue ridges in the evening light. Nearly home now.

It feels strange saying that, because we haven’t got a home yet. Not a real home. I’ll tell you what else is strange – just having one single key on your key ring. And that’s a car key. That’s bloody strange.

Anyway, somewhere on the southern slopes of the Sierra Nevada is a little house on a hillside that we’re renting for a while. That will be home for the time being. Another hour and we’ll be there. The cats can’t wait.

Welcome to Awkward Roads. This is a website about searching for a new home in a strange land. It's about setting off in a new direction. Trouble is, at this point I'm not sure what that direction is – except that it's south and towards the sun. There's no clear route and no telling where these roads will take me, because roads can be awkward at times. That's why this website is called Awkward Roads . . .

TAKE A LOOK AT MY MOUNTAIN BLOG – BECAUSE THEY’RE THERE